A resistor is a passive two-terminal electrical component that implements electrical resistance as a circuit element. Resistors act to reduce current flow, and, at the same time, act to lower voltage levels within circuits. 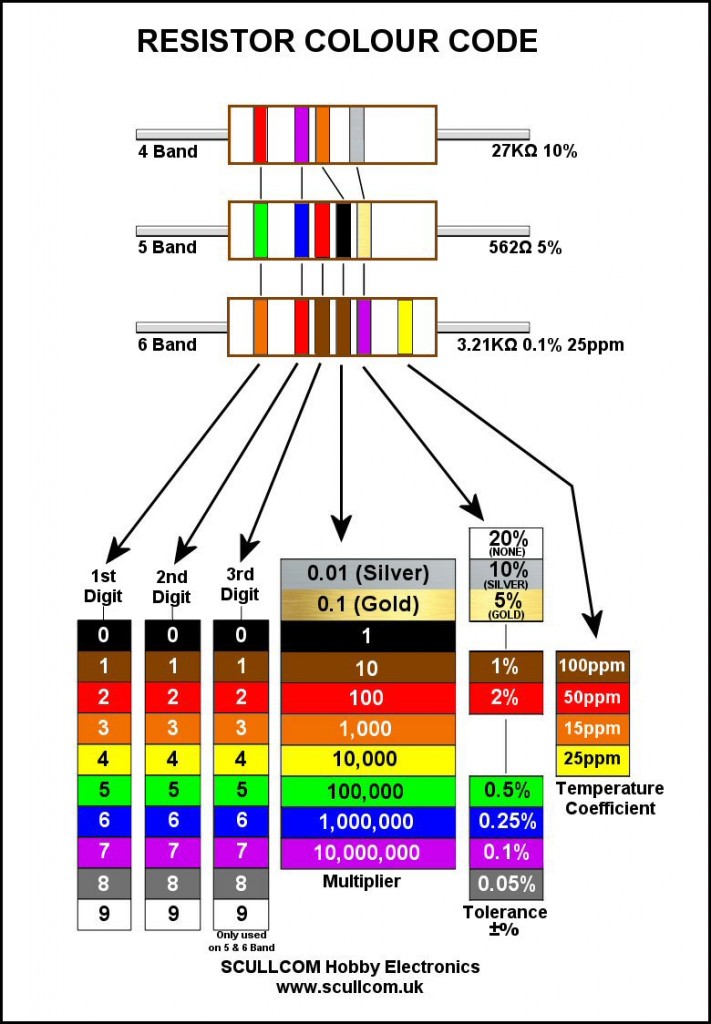 These are general purpose resistors with excellent transient and surge handling capabilities. The resistance value of this type can increase by as much as 20% during storage or humid conditions. Resistance values can be found up to 100 MΩ. The typical temperature coefficient can be between -200 to -8000 ppm/°C. and noise is usually below 6μV/V. Typical tolerance ratings range from 5% to 20%.

These are also general purpose resistors but cost less than Carbon Composition type and usually are available in values from 10Ω to 25MΩ. These are usually available in tolerance ratings of 2% to 10% and have a temperature coefficient of between -200 to -1000 ppm/°C. Noise level is usually better than 10μV/V.

These type are high stability with long life and excellent HF performance. They have a fair degree of precision at low resistance values. The resistance value is stable to around 100MHz but fall off at higher frequencies. This type of resistor is ideal for use in measuring circuits, filters and HF tuning circuits. They are available in tolerances of 0.01% to 20% and have a temperature coefficient of ±25 to ±175 ppm/°C with noise levels of only 0.1μV/V.

Metal-oxide film resistors are made of metal oxides this results in a higher operating temperature and greater stability/reliability than Metal film type. These are usually used in military grade equipment where high endurance demands are required.

Similar to Metal Film in performance and are available in either Thick or Thin Film (or Metal Film) types. Thick Film are manufactured using screen and stencil printing processes and most SMD (surface mount device) resistors today are of this type. Thin film resistors are made by sputtering (a method of vacuum deposition) the resistive material onto an insulating substrate. The film is then etched in a similar manner to that used in making printed circuit boards; that is, the surface is coated with a photo-sensitive material, then covered by a pattern film, irradiated with ultraviolet light, and then the exposed photo-sensitive coating is developed, and underlying thin film is etched away. The resistance of both thick and thin film resistors after manufacture is not highly accurate; they are usually trimmed to an accurate value by abrasive or laser trimming. Thin film resistors have tolerances of 0.1% to 1% with temperature coefficient of 50ppm/°C (high precision Thin Film available with 0.05% with temperature coefficient of 5ppm/°C). Thick film resistors have tolerances usually of 0.5% to 2%.

Wirewound resistors are commonly made by winding a metal wire, usually nichrome, around a ceramic, plastic, or fiberglass core.

Precision wirewound resistors consist of resistance wire wound on a plastic or ceramic bobbin. The wire is spot welded to outside copper leads and epoxy molded to protect it from the outside environment. They have tolerances ranging from ±0.005% and temperature coefficient of 3ppm/°C.